The Bayern-Bosses call us spies 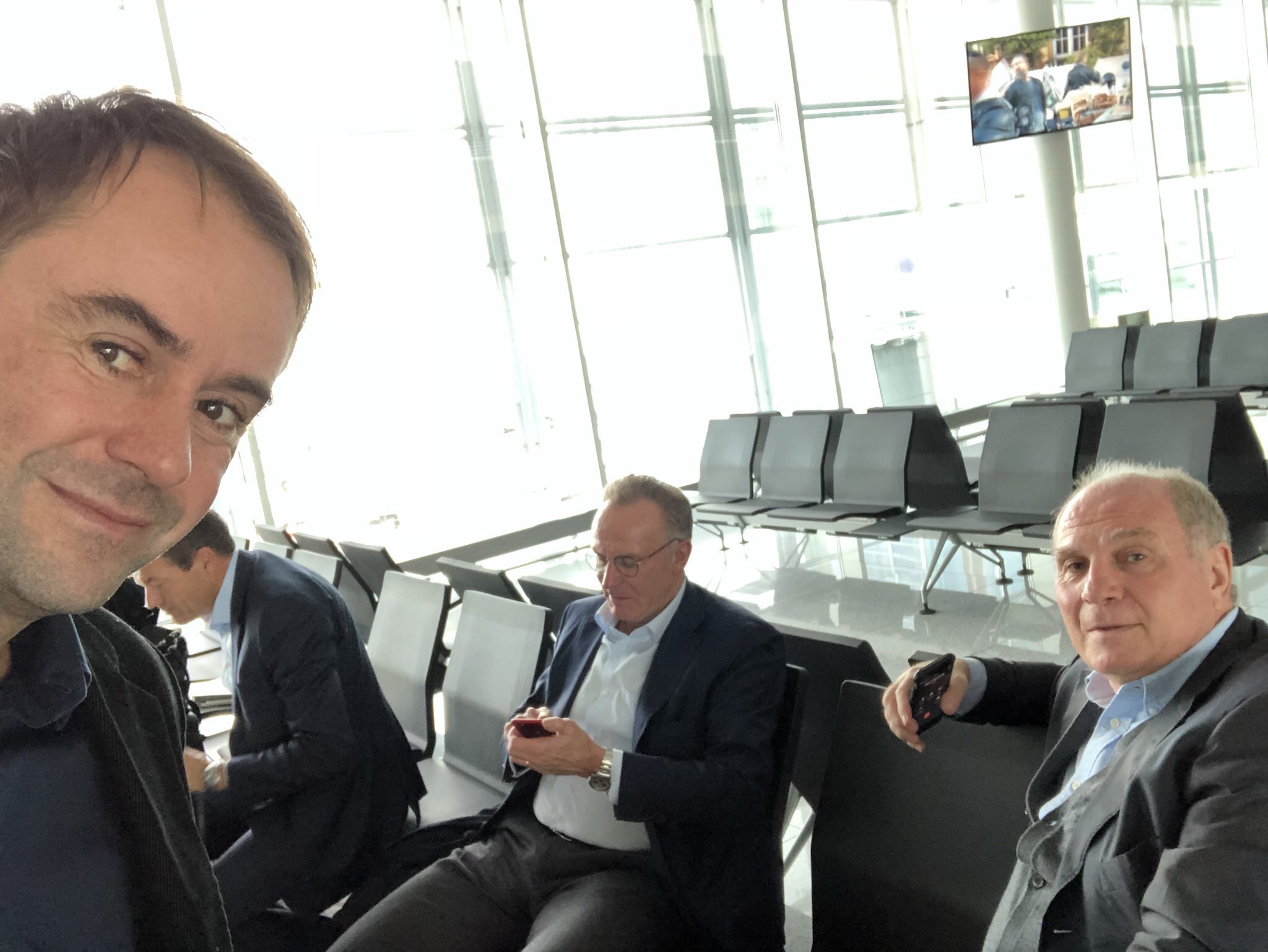 28 Oct The Bayern-Bosses call us spies

Posted at 10:38h in General by cfbayern

I turn off at the Munich Terminal to my gate for my flight to the cup-match in Leipzig when a familiar voice welcomes me: “Mister Falk, does the SportBild have spies at Lufthansa? Or why do you allways know which machine we take?“. It’s Uli Hoeneß who has fun while teasing me. Actually, it is a running gag of the Bayern bosses. Before the departure to Berlin, some weeks ago Karl – Heinz Rummenigge called my SportBild colleague Tobi Altschäffl “James Bond“, but in the last months we meet each other very often at the airport. Uli Hoeneß who was sitting gloatingly next to Rummenigge, just took this assist and now the two bosses pass this joke around.

On matchdays, the machines are full of prominence. The team flies the day before the matchday, the management flies together on matchday. Short look through the rows: The Bussines class of the bombardier (the smallest jet of Lufthansa with his 90 seats) is in the hands of Bayern. In the front row on the right side at the seat 1A, executive Jörg Wacker, who is responsible for the internationalisation of the club, finds his place. On the left at 2D is Karl – Heinz Rummenigge. Uli Hoeneß and (3C) and Andi Jung (3D), who is the marketing director, share the third row. Right in the middle of all those Bayern officials is the TV-moderator Kai Pflaume. For him, as you know, only the love counts (it’s the name of his show). Pflaume gives all of his love to the FC Bayern. this is the reason why he is one of the favorite guests of the Bayern – bosses. In the machines for the return flight you will can find Kai Pflaume, too. The Bayern – bosses often let him fly with the teams machine. Leipzig is the place were Pflaume got born, but that doesn’t change anything on his love for the FCB. Together with Hoeneß he is talking deeply about the Cup – fixture against RB while Rummenigge prefers to read some newspapers on his tablet.

With the former goalkeeper Raimond Aumann who is responsible for everythings around the fans. He is sitting in the back of the plane in the Economy class (5f). For him it’s going to be a relaxed journey, becuase the FC Bayern – Ultras won’t come to Leipzig. They are going to boycott this game, like they did in the last match – up against Leipzig. 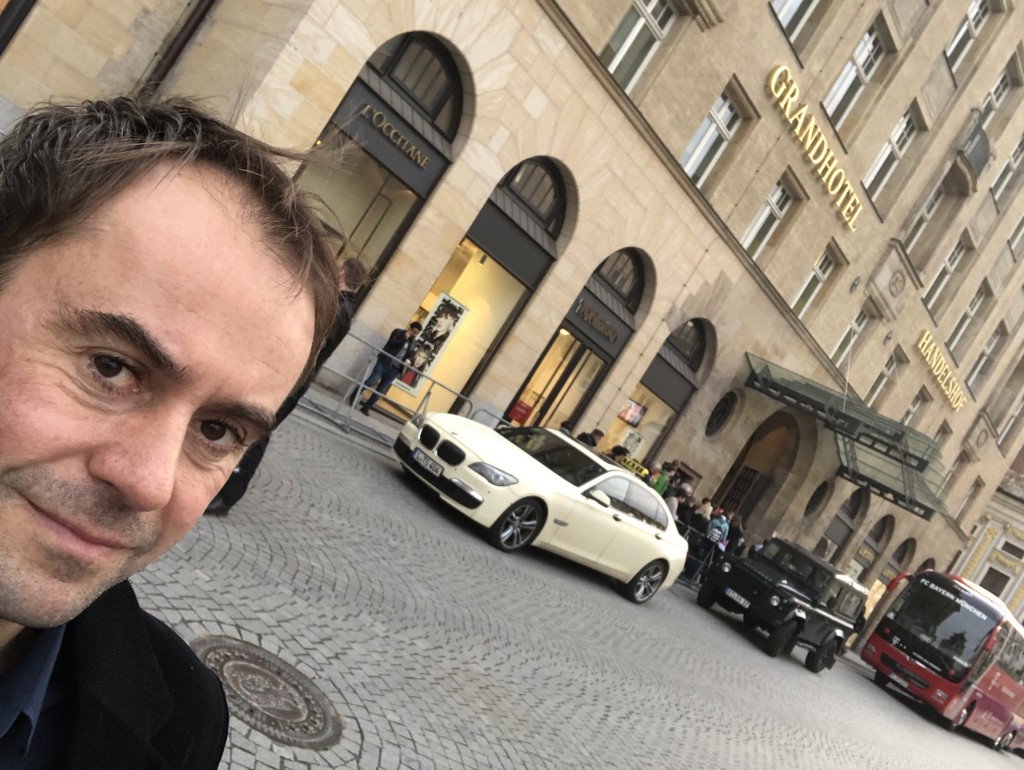 The team is going to stay in the “Steigenberger Grandhotel“ in the city center of Leipzig. On my way to the match I stop by at the hotel, just to see if their are any news. Before the bosses meet the squad in the team hotel, they are going to have a dinner on which they got invited by the officials of RB Leipzig. A good basis is going to be important tonight, because this Cup – fight is going to go into overtime and will find his end in a penalty shoot – out which is going to be won by FC Bayern with 5-6. Just some minutes after midnight there is going to be a little shock moment. 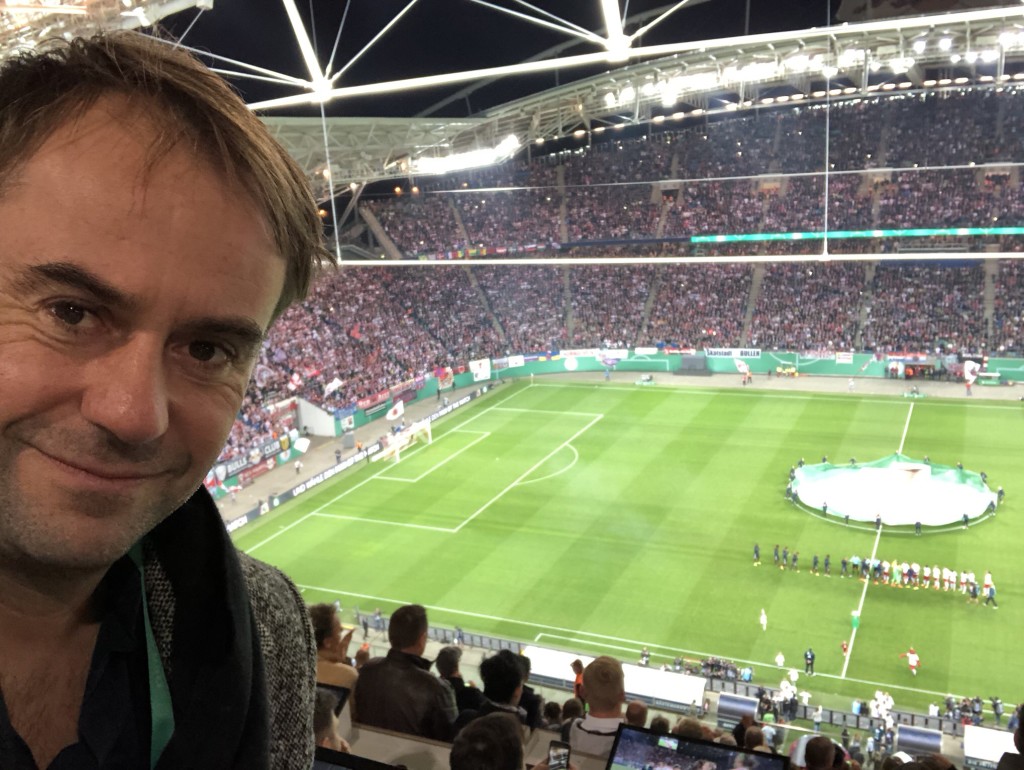 Team Doctor Dr. Braun organised a strecher into the Bayerns – cabine. The first thoughts are going to Jupp Heynckes who was sitting on the Bayern – bench with blood stains on his shirts. Luckily, the patient could come on his own two feets to the ambulance and had not to be carried on the stretcher. It’s Bayerns – physotherapist, Gianni Bianchi, who was brought from Florence to Munich by Luca Toni. He had problems with his circulation (the next day everything was good again). After that Timo Werner sneaks unnoticed out of the mixed zone where all the journalsit were waiting for his statements after missing the fifth and last penalty. From journalistic point of view it would have been very interesting to see what his feelings are about at the moment.

During that, Heynckes is sitting in the press conference, now, just wearing a T-shirt. I was the first one who could ask something and I was interested in how he is right now? “I snuffed to hard, and after that i got nosebleeds. But now I am ok.“, he says and thanks for asking. From the deepest angle of my eye, I can see another physio leaning to the wall. Just to be their if Heynckess‘ nosebleeds should start again.

But this is still not the end of this evening. I stopped by at the RB-Lounge which was getting emptier and emptier after that defeat. The Leipzig – bosses, obviously, have enough for today. At 1 am the lounge closes his doors, but we get, as a second over time, the last glasses of vine.

But again, it isn’t over, yet. For a debriefing we are going to the bar “Trattoria No. 1“. That evening had enogh subjects to discuss about for our reporting about that match. Moreover we are able to get informations from the guests who are now filling the very known Italian bar. Somwhere around 3 am it was over, also for us. Even James Bond has to sleep.

Maybe Rummenigge and Hoeneß are, actually, not so wrong with their assessments. Honestly, on this journeys we are allways spying a little bit.